Home » So Sad: Pregnant Woman Dies While Being Delivered Of Twins On Lagos Street 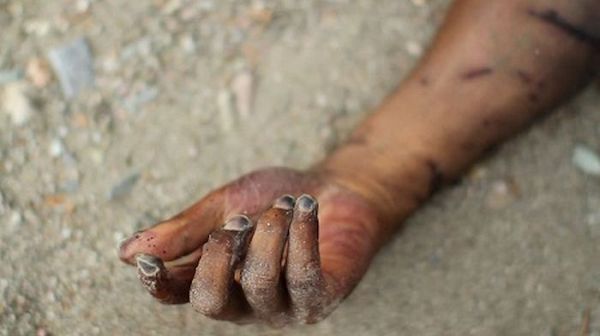 A woman identified as Bunmi Muri, has been reported died along with her twin babies during delivery around a park on Ogooluwa Street, in the Oko Oshodi area of Bariga, Lagos State.

Information gathered revealed that Bunmi was on her way to visit her husband when she went into labour and some residents took her to a corner to have the babies.

The 35-year-old, however, died alongside the twin babies.

A resident, Felix Chidi, noted that woman was successfully delivered to one of the babies and died while attempting to deliver the second baby.

He said, “From what we gathered, she was going to collect something from her husband who worked in a park. But on her way there, she went into labour and was taken to a corner to deliver the babies. She was delivered of the first baby, but died while giving birth to the second baby. The deaths happened because there was no experienced medical practitioner to deliver the babies.”

Their corpses were were removed by the Lagos State Ambulance Service and deposited at the Yaba General Hospital.

TagsPregnant Woman
INEC Official Died While Trying To Save His Son From Gas Explosion In Lagos
Nigerian Activist, Segalink Withdraws From #EndSARS Protest
We use cookies on our website to give you the most relevant experience by remembering your preferences and repeat visits. By clicking “Accept”, you consent to the use of ALL the cookies.
Cookie settingsACCEPT
Privacy & Cookies Policy