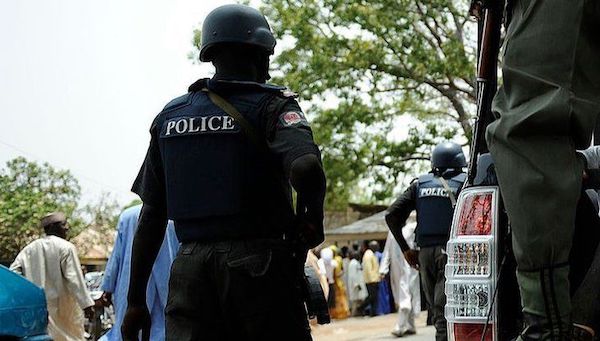 The police have been accused of arresting innocent people and saying they participated in the burning of public and private properties.

This was the claim made by many arrested by the police in Ondo state over the incident.

A total of 18 suspects were apprehended in connection with the crimes at different locations of the state.

Out of the figures, nine suspects were nabbed for alleged arson case, looting, murder, and aiding of detainees’ escape.

The suspects were paraded on Tuesday before journalists at the police headquarters on Igbatoro road in Akure.

According to the police, the suspects were arrested in Owo, Akure, Ore, and Ondo areas of the state.

One of the suspects, Ayodele Bukunmi, said she was arrested shortly after the campaign office of Governor Rotimi Akeredolu was set ablaze by some thugs masquerading as protesters.

She said, “Soldiers arrested me after the governor’s campaign office was set ablaze in Akure and I don’t know anything about this.

“It was the soldiers that handed me over to the police. I told them I don’t know anything concerning the damage to the office. Honestly, I am innocent of this crime.”

The 23-year-old female student added that she was on the walkway when she was rounded up by combined security agents and accused of being part of those who set the building ablaze.

Another suspect, Ani Obinna, said the police wrongly accused him of damaging public properties in the state.

Obinna said he was on his way home when the police arrested and bundled him into the waiting van, accusing him of being one of the arsonists.

He lamented that the police had decided to leave the real arsonists and go after innocent citizens, especially the youths in the state.

“I was only a victim of incessant police arrest. I have never damaged public properties in my entire life, and I would never do that. I was arrested with the people here by the police last week.

“They accused us of setting the public buildings, mostly the APC secretariat, ablaze. I was never near that place, and they denied me access to clear myself. They left out the real hoodlums and went after innocent people like us.”

Other suspects also accused the police of random arrest, adding that they had even refused them to have prompt access to their parents.

Earlier, the State Commissioner of Police, Bolaji Salami, said the suspects were involved in wide looting, destruction, arson, stealing, and armed robbery at various parts of the state.

Salami said that the suspects used the #EndSARS protests as a cover-up for the various crimes they allegedly committed.

He disclosed that two policemen and a civilian were killed during the violent protests that disrupted major towns in the state.

According to him, the policemen were killed in Ondo and Ore while the civilian was a thug allegedly planning to attack a bank in the state.

“For those who looted our property, burnt our homes, killed our colleagues, denied us the right to decent living, I am glad to say the law is not sleeping and will take its course on you.

“It is, therefore, my honour to present to you a total number of eighteen suspects who took part in the destruction, looting, aiding and abetting of the escape of detainees, arson, stealing, robbery and killing in various parts of Ondo State,” he said.

Teenage Remains Missing After Getting Arrested By SARS In 2017