Home » EndSARS: Mother of Four Recount How She Was Arrested By Soldiers On Her Way To Buy Food Stuffs
Gist 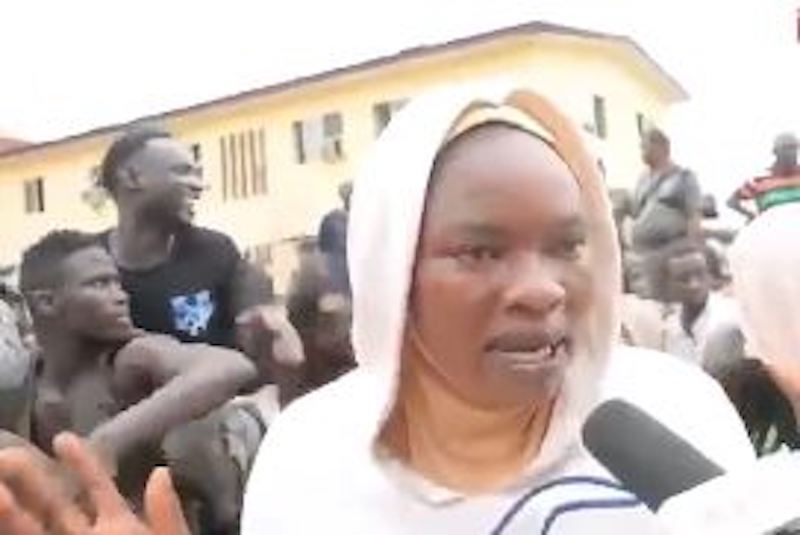 A mother of four identified as Aisha Muhammed was seen a viral video lamenting about how she was arrested by soldiers while she was headed to buy foodstuffs for her family.

Aisha Muhammed, made this known while she was paraded with many others for defying curfew in Lagos state.

Speaking with newsmen, She Said;

“My name is Aisha Muhammed, I live at alpha beach No 32 Dorcas street. I went to Jakande to buy food stuffs to cook for my children and I’m a mother of four children. On my way going we met so many soldiers and some guys, the moment people sighted them they all began to run but when I know I did not do anything wrong I did not run.

Suddenly, The soldiers ordered us to come closer to them “come here!!!” and we patiently obeyed and went to meet them. Immediately they told us to lie down and we were not aware that there was curfew, I argued with them that I did not know there was curfew. I even showed them the money I wanted to use to go and buy food stuffs for my children but they denied our plea for innocence and the army arrested us.

No food to eat here and we are also being assaulted, the surprising truth is that we are more than this. We were captured together with some Hausa girls but due to the fact that the soldiers and the Hausa girls are from the same tribe, they spoke their indigenous language to themselves and they Hausa girls were released by the soldiers.

I begged them also to let us go home but they refused, we have nothing to eat here despite being here for the 6th day, it’s only water that we are given. Even the police officers were punishing us saying we are criminals, they even used the bottom of their guns to hit my leg.

I didn’t do anything, I left my children at home with nothing for them to eat including my husband. The soldiers said there’s no movement that what were we doing outside, that there is curfew, I told them I went to buy some things for my children but they told me to keep quiet.

The money I wanted to use to buy food for my children which is just #1000, i already volunteered it and we used it to buy #150 rice yesterday, this is the change with me here. They are torturing us whenever we try to express our innocence and right now it’s only prayer that can set us free. They said and accused of burning police stations, can a lady burn police station?

At least they showed everything on the television, they should at least see the faces of those who destroyed the police stations, please we are innocent, don’t let us just die her for nothing. I have a baby and the child doesn’t know my whereabouts.”

Watch a video of her speaking below;