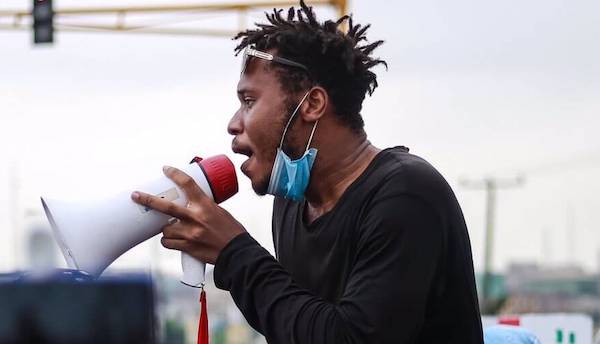 The sister of Eromosele Adene, who was arrested for leading #EndSARS protest against the government cried out that her brother is not well and is suffering from a liver problem.

Onomene Adene, has appealed to the police authorities to release her brother on health grounds as his continued detention could worsen his health condition.

Recall that, 27-year-old Eromosele, who is a musician and a civil rights activist, was arrested by 15 policemen at his home located in the Ikeja area of Lagos State on Saturday.

He was subsequently moved to the Force Criminal Investigation Department at the Police Headquarters, Abuja, on Monday.

Speaking Tuesday on a television programme in Lagos, Onomene said, “During his Belle Food Naija last year, he went to about six states to share alms.

“So, when he came back, he had some issues with his liver – may be the change of environment or the situation of the places he found himself because of his love for this country.

“He came back with some issues with his liver, hepatitis something, I can’t remember which. That is not even good for him. Him being there, him being in a place he is not used to is not good for him. Anything can actually happen to him. He needs to be released.”

Also, Eromosele’s legal representative, Babatunde Jinadu, said his client has been in the clinic since his transfer to the FCID in Abuja.

Jinadu said the police authorities were playing “hide-and-seek” with his client’s case but expressed hopes to secure his bail today in Abuja.

“I am here to see him and I will still apply for his bail again after whatever investigation they want to carry out. And I hope they will grant the bail,” he stated.

TagsEndSARS Campaigner Eromosele Adene
How Police ‘Tricked’ Me Before Arresting Her Brother – Sister of #EndSARS Promoter, Adene Reveals
Panic as Strange Disease Kills 11, Five Hospitalised in Oyo
We use cookies on our website to give you the most relevant experience by remembering your preferences and repeat visits. By clicking “Accept”, you consent to the use of ALL the cookies.
Cookie settingsACCEPT
Privacy & Cookies Policy