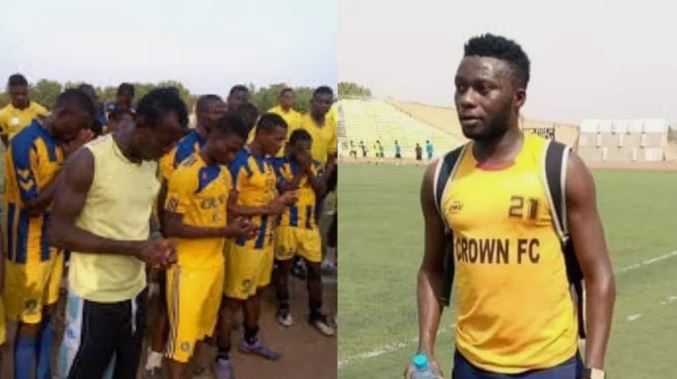 Nigerian club, Gateway FC is currently in a state of mourning after losing a player who was training with the team to death.

It was gathered that ex-Shooting Stars player Yusuf Usman Usein slumped and died on Sunday evening, November 15 during training.

The forward who was popularly known as ‘Eiye’ was training with Gateway FC of Abeokuta with the hopes of signing for them.

Usein was said to have been resuscitated on the pitch by medical men who rushed into action after he slumped. And according to the confirmation by Crown FC of Ogbomoso media officer Tunji Alabi, the player died later in the midnight.

”It is so unfortunate that we have lost Usein and we pray that God will forgive him and grant him eternal rest. He was a good and dedicated player when he was playing for us in Ogbomoso,”

Yusuf Usman Usein actually started his football career on the streets of Ibadan in Oyo state before he was given the chance to join Shooting Stars. The lanky forward spent two seasons with the Ibadan-based club before he moved to Crown FC of Ogbomoso.

Gateway FC will be playing in the Nigeria’s second tier League which is the National League in the 2020/21 season.

TagsNigerian Striker
Lady Died After Her Boyfriend Ex-Lover Set House on Fire
Police Arrest Three Suspects During A Robbery Operation In Ogun State
We use cookies on our website to give you the most relevant experience by remembering your preferences and repeat visits. By clicking “Accept”, you consent to the use of ALL the cookies.
Cookie settingsACCEPT
Privacy & Cookies Policy