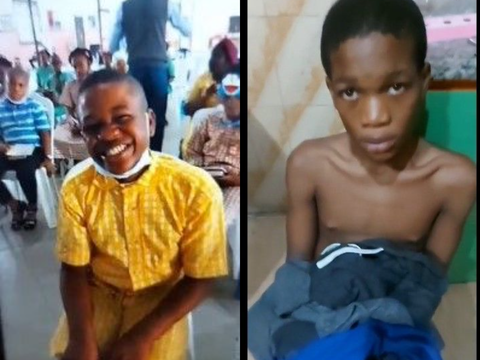 A woman cries out as she alleged that her 11-year-old son has been cexually molested by fellow students in a college in Akwa Ibom State, South-south Nigeria.

The Akwa Ibom State Governor, Udom Emmanuel, has ordered an investigation into the allegation.

The woman, Deborah Okezie, posted a video on Facebook where she said some senior students in the college, Deeper Life High School, Uyo, “habitually inserted their fingers and toes in his son’s anu3.”

She said her son was frequently starved and beaten up by the senior students.

The victim was moved by the school principal from a hostel where other junior students stayed to another hotel filled with senior students because he was bedwetting, Mrs Okezie said in the clip which has gone viral on Facebook.

The victim looked terrified in the video. The mother prodded him to speak up about his ordeal.

“They said if he complained he will be a dead man,” Mrs Okezie said. “Please, help me share this (video) until it gets to the appropriate authorities.”

“They will remove his boxer and push their legs and hands into his anus,” the woman said.

The boy said the senior students threatened to kill him if he reported the matter to the school principal. Watch the video below;