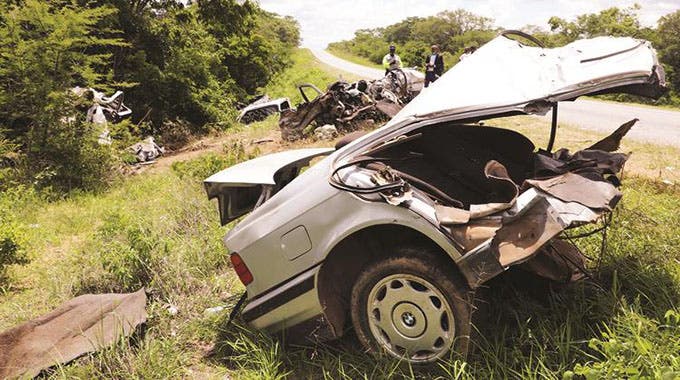 Two families are in a state of mourning as they lost 14 family members, after 18 people died in a horror crash along the Harare-Nyamapanda highway, Zimbabwe on Sunday.

The accident occured when an Isuzu KB double cab truck collided head-on with a BMW near the Mutoko Business Centre. 14 people died on the spot while 4 others died from their injuries at Mutoko Hospital.

The Herald reports that when the accident occured, the Rutsito family was traveling in the Isuzu KB double cab truck. The Chitimbe family was in a BMW which they had boarded when looking for lifts.

Munyaradzi Kabasa, a member of the Rutsito family, told the Herald how 8 family members had died in the crash.

“We are pained by this unexpected death which took away eight people from our family. Masimba Rutsito was my brother and was aged 39. He and his family had come home to visit from Harare. On their way back, that is when they met their fate.

“He was driving the Isuzu double cab and in the car were 12 people who included his wife Audrey Mavhunga, his children — Malcolm, Naishe and Makomborero. Also in the car was our uncle, Simbarashe Mapuranga and his wife Grace Madzinga together with their child, Samuel. All these perished in the accident.

“They have been transferred to Parirenyatwa Group of Hospitals and they are critical. They need our prayers. We are in great pain.”

Shock as Bar Owner Dies During Drinking Competition
60 Year Old Man Dies In A Hotel Room After Check In With 25 Year Old Side Chick
We use cookies on our website to give you the most relevant experience by remembering your preferences and repeat visits. By clicking “Accept”, you consent to the use of ALL the cookies.
Cookie settingsACCEPT
Privacy & Cookies Policy