‘How can one man marry over 6 wives and still have his brain intact?’ – Gov Wike blast Regina Daniel’s husband 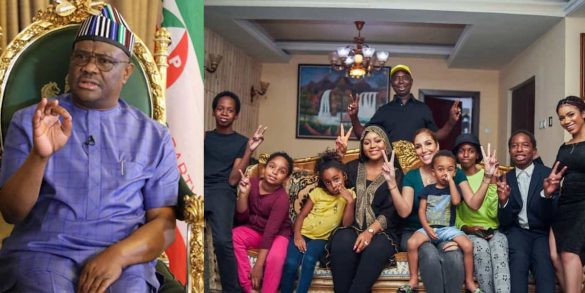 Governor, Rivers State, Nyesom Wike has taken a swipe at Regina Daniels’s husband, Ned Nwoko, over his recent comments that Atiku Abubakar dumped Wike for Governor Ifeanyi Okowa because he (Wike) is a trouble maker.

In a statement Wike released on Thursday, June 23, he said, “One man who has been busy marrying all the young girls in Nigeria came out and was talking nonsense about me in BBC news interview that Atiku dumped me because I am a trouble maker.

“Ned Nwoko should tell Nigerians what he has achieved ever since he joined politics other than jumping from one little girl to another. A Pedophile coming to talk to me a sitting Governor should hide his face in shame.

“I joined PDP before him, he has no political structure in PDP. I have a higher stake in PDP than he. If he’s man enough let him contest for PDP Presidential primary election and watch if he will get one single vote.

“This is a man after drinking Ogogoro mixed with burukutu, he will go in search of little girls to defile. His only achievement since he joined politics is marrying different kinds of women and this is the type of person PDP Delta State gave the mandate to contest for Senatorial position in the forthcoming election. Is that how Nigeria is going to change for the better.

“Ned Nwoko should face the pyramid of wives he gathered in his house and leave Wike alone. It’s obvious he no longer thinks straight like a normal human being. Tell me, how can one man marry over 6 wives and still have his brain intact.”

Kemi Filani had earlier reported that Ned Nwoko said Peter Obi cannot become president of Nigeria because he does not have the structure to rule Nigeria.

Speaking In an exclusive interview with the BBC, Ned Nwoko said Peter Obi is a good man and has youths and people who have been campaigning for him in the last few months, but the Labour Party does not have the required structure to rule Nigeria.

He said Peter Obi should not have left the People Democratic Party and still wishes Peter Obi could come back to the party.

Ned Nwoko said the population of Nigeria is on the rise and the Labour Party can not handle the issues of the country.

Ned Nwoko praised his party for making their primary election an open one and said Atiku Abubakar is one of the most experienced men to rule Nigeria.

Finally, he urged Nigerians not to let tribes or religion influence their vote in the upcoming elections.