I put on rags, trekked to movie locations to raise kids, now my son gifted me a house- Iya Rainbow celebrates 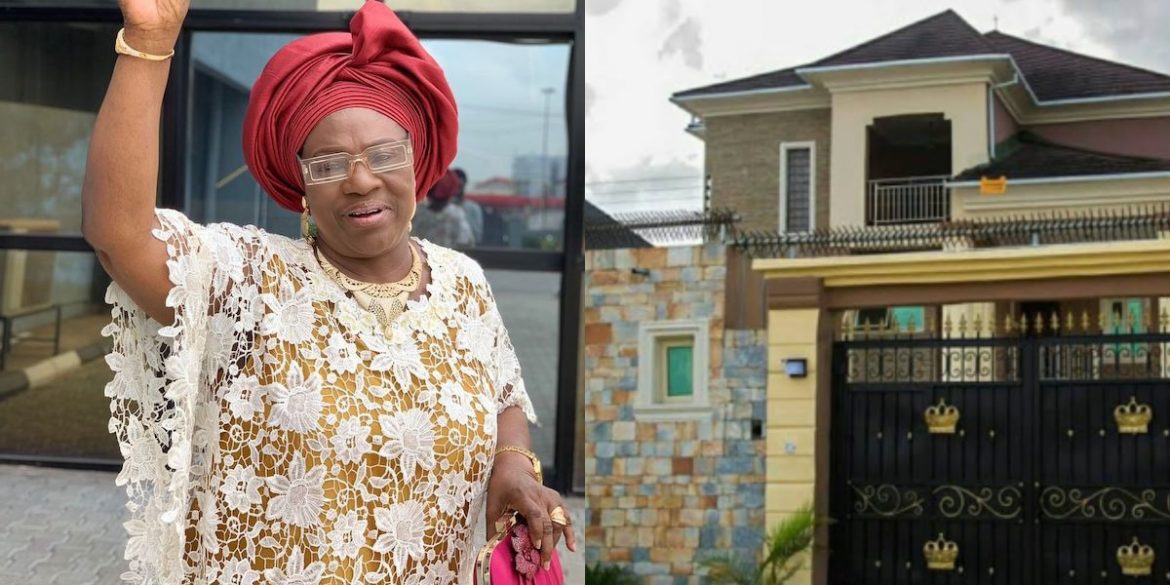 Veteran actress Idowu Philips aka Iya Rainbow has shared how her son recently surprised her with a house gift after years of struggles to raise her kids after the death of her husband.

In an interview with Saturday Beats, she said, “I am happy because for someone to be abroad and come home to build a house, he deserves to be praised and appreciated.

“I was the one who helped him to purchase the land but he did not tell me what he wanted to do with it. He only told me he wanted to buy land, and I should help him inspect it, which I did and negotiated (the price).

“I was also the one he sent the money to, and he started the building gradually. When it was time for the roofing, I was the one he asked to help buy the materials to be used, and I did that.

“It was when the house was completed that he said to me, ‘Mummy, you are the one I built this house for. It was so pleasing to me that I wept tears of joy.

“When their father died, there was no one who could help me. I was left with all the children. It was taxing but I’m grateful to God because my child built me a house.”

Recall that the actor stated that she was once called the ‘cheapest actress in Nigeria’ because she always appeared in any movie she was called for in a bid to raise money for her children’s feeding and schooling when their father died. Asked if she felt the house gift was adequate reward for her labour, the actress said, “It was written in newspapers then that I was the cheapest actress. I was popularly known as ‘Iya Osumare’ then not ‘Iya Rainbow’. If I did not do that then, I wouldn’t have been able to successfully raise my five children.

“Even in church, when everyone else bought clothes and jewelleries for the festive season, I dared not do that. The best I could do was to buy (those things) for my kids while I put on rags. It was because there was no money and there was no one I could meet (for help). I also did not want to get married to another husband. It was not an easy thing to do because I used to trek to some movie locations. However, I am grateful that it has ended in praise.”

Advising mothers who are currently making sacrifices for the success of their children not to die brooding because they lost their husband, she said, “Don’t say because your husband died, you will brood to death. If you do that, you will end up putting your children in more suffering.

“Stand up and tighten your loins. Look for work that will pay you to train those children to become successful.”

The actress who will be attaining the age of 80 in some months also stated that she is grateful to God for coming this far and she looks forward to the coming years with relish. She added, “I am grateful to God because my husband died since 1984. God kept me and my children. He sustained me that in my lifetime, my child built me a house and one is also planning to buy me a car.”

Actress Iyabo Ojo reveals the secret behind her name

“Keep Snatching What You Admire” – Comedian...

A Loyal Darling With Heart of Gold...