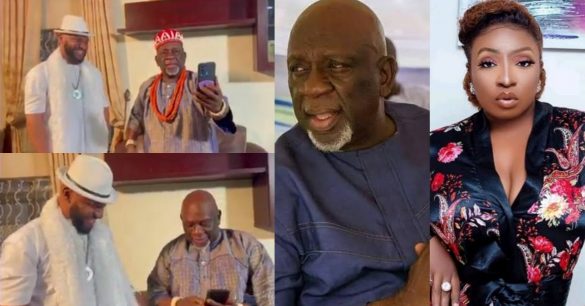 Larry Koldsweat has blasted actress Anita Joseph and others who those criticised actor Yul Edochie for marrying a second wife.

In a clip Yul Edochie shared on Facebook on Sunday, July 3, Larry Koldsweat and Yul are seen exchanging pleasantries on a movie set.

The Thespian hailed Yul Edochie, referring to him as an ‘odogwu’ while the latter prostrated before him.

Speaking in the Igbo language, Larry advised Yul against paying attention to those attacking him on social media over the second wife saga.

The Veteran rained curses on Yul Edochie’s critics, describing them as ‘mad people’.

Koldsweat further took a swipe at Anita Joseph, saying that he has also placed a curse on her.

Links Up With Yul Edochie, Slams Anita Joseph, Others Trolling Him Over 2nd Wife Saga

How video of my children’s filthy condition broke my heart — Actor, Itele