Home » Man catches father lodging at a hotel room with a woman, approaches him 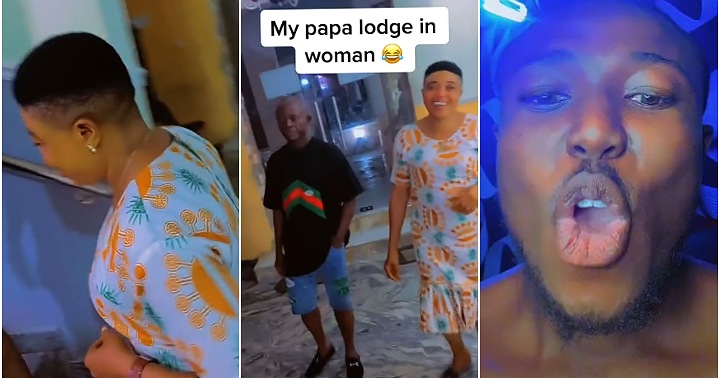 A viral video shared on social media captures an elderly man taking a ‘woman’ for a treat at a hotel.

His son bumped into them at a hotel, captured the moment and shared it online.

In the video, the young Nigerian man expressed his amazement over the act carried out by his father. He hailed him in the video and referred to him as a ‘guy man’ and ‘big boy’.

The clip showed the moment they arrived at the hotel, and he saluted his father.

The woman was seen smiling and walking elegantly while his father kept a straight face as they climbed the stairs and headed to their room.

” The right love you find when you’re young will provide all the happiness you need at old age. Nice couple. Good son”.

12yrs after death, Nigerian rapper Dagrin declared wanted by police in Sierra Leone
62-year-old man cries out as his wife takes decision not to sleep with him
We use cookies on our website to give you the most relevant experience by remembering your preferences and repeat visits. By clicking “Accept”, you consent to the use of ALL the cookies.
Cookie settingsACCEPT
Privacy & Cookies Policy