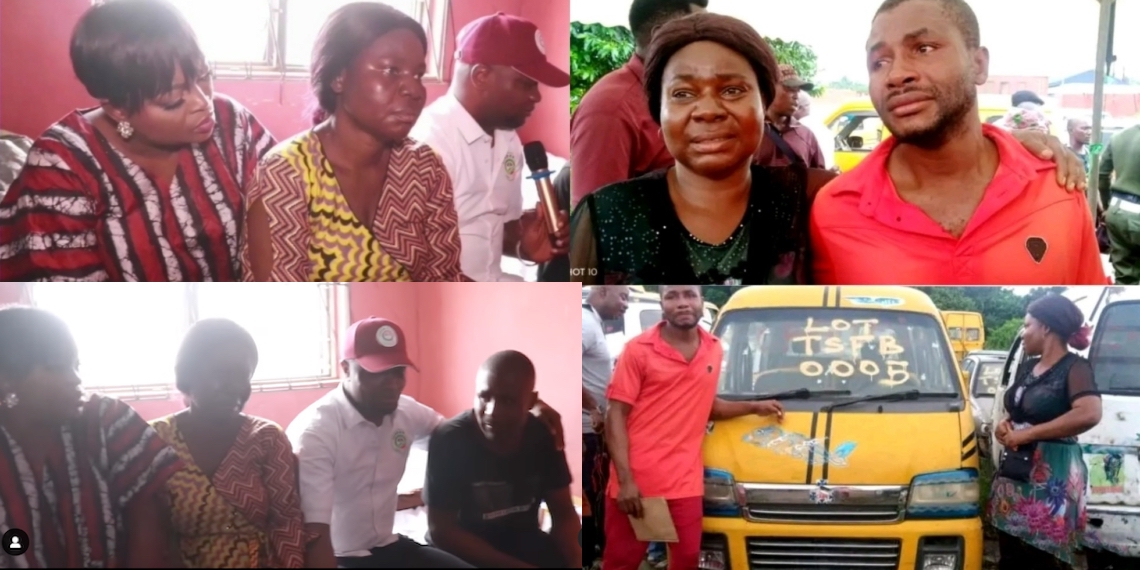 The governorship candidate of the Peoples Democratic Party, PDP, in Lagos State, Jandor, and his running mate and actress Funke Akindele on Saturday visited one Mr. Osinachi Ndukwe, one of the victims of the recently auctioned 134 cars impounded for traffic offenses by the Lagos State Government.

According to Osinachi, before his car was auctioned, he was sentenced to three months imprisonment for driving against traffic and lost his three-year-old daughter during his jail term due to the non-availability of funds to cater to her health.

Recall that the Lagos state government through its Ministry of Justice and The state Taskforce, organised the public auction of over 134 abandoned and forfeited vehicles, at Lagos State Task Force’ headquarters, Alausa, Ikeja, where a crowd of auctioneers, agents, buyers and vehicle owners tried to outwit one another.

A widow, Dorothy Dike and her son, Osinachi Ndukwe, were reduced to tears in Lagos when their only vehicle bought at the rate of N1.8.million on hired purchase was being auctioned for N450,000.

In a video making the rounds on social media, PDP Guber candidate Jandor and Funke paid Ndukwe and his mother Dorothy a visit at their home in an undisclosed area in Lagos.

Ndukwe said he bought the vehicle which was impounded at the rate of N1.8 million on hired purchase.

Earlier today, my running mate @funkejenifaakindele and I met with Mr. Osinachi Ndukwe, one of the victims of the recently auctioned 134 cars impounded for traffic offences by the Lagos State Government. He said he was sentenced to 3 months imprisonment for driving against the traffic and the vehicle was impounded.

During his jail term, he lost his three-year-old daughter due to non-availability of funds to cater for her health. After serving the jail term, his bus was auctioned and his means of survival gone.

We often wonder why we have insecurity in the state but the answers are right in front of us. How do they expect him to take care of his family?

This is not to encourage people driving against the traffic or break the state law, but taking ones means of livelihood in the name of penalty for traffic offence is Inhumane.

What kind of government takes away the means of livelihood from its people?

We can do better. The power is in our hands.