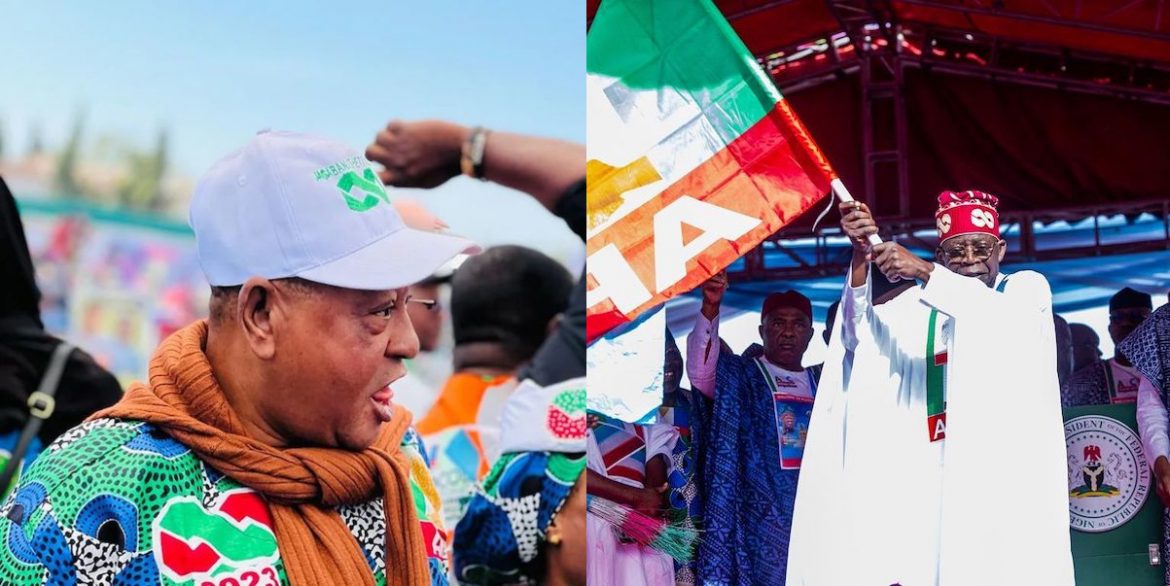 Mixed Reaction has trail as some of the fans of veteran actor Jide Kosoko hail him for supporting Tinubu while some berated him.

Timofgist recalls that Jide Kosoko was appointed to the presidential campaign council of the All Progressives Congress ahead of the 2023 general election.

He was spotted with some Nollywood and Kanywood stars on Tuesday in Jos, the Plateau capital, to support the presidential candidate of All Progressives Congress (APC) Ahmed Tinubu, and his running mate Senator Kashim Shettima.

Sharing a photo from the campaign, he wrote:

Reacting to this some of his fans took to comment to drag for supporting Tinubu while some hail him for his action.

oduekunolasunbo: GOD bless PD Apc….. honestly reason am..can u swear with ur grey hair say this ur bat is healthy enough to rule NIGERIA.. forget tribe and face reality.shld this man not make it if eventually elect.the power goes back to North if u guys are talking Abt tribe..🤷…MAY GOD’S WILL COME TO PASS IN HIS INFINITE MERCY🙏 amen.and not anyone selfish interest.

kim.amolu: Being a Bat supporter is nothing to be proud of .

oneshado: Sir how much did they paid you? With due respect sir, you just sold your ground children future to that millions paid into your account

officialtj007: Alatenuje, we dey wait for you and you colleagues to wen una fall sick to come do bambiallah , shameless pipu

tobianoking01: You people have make it already and you want to get down the younger once and you till dis man is the best

adewale__destiny: These ones have no future plans for this country, tell us what you’re proud of in supporting this being, are you proud of his acting today as a case study, anyway let it be known, whatever you sow today, your coming generation will reap with no resist.

doublemide_collections: I didn’t see anything wrong in him supporting his choice candidate instead of u all gather here and be insulting elderly person why can’t u be and post and proud of ur candidate to its choice now

joshbiodun: People want a better Nigeria but refuse to respect other people’s choice. I think the progress should begin with citizens before we start blaming the government. If person no support your candidate, you assume he/she has automatically collected bribe.

amber_hahn407: With due respect sir I’m highly disappointed in u, so you choose to follow a leader that has lost his memory, a leader that isn’t healthy enough to remember his political party (PDAPC). WTF, toying with our future what a pity

dele_akingbasote: He has made his own choice to support his own candidate you should do the same as well you people have no right to insult anyone supporting their prefer candidate he’s not your child you don’t feed him and his family

olayusbra: I respect ur choice sir…. you are not my father but omoluabi you are indeed my father as a Yoruba man. And I disagree with you that Tinubu can’t take us ur children thousand million of us to right places as a Yoruba Man.

iam_harkinwunmmy07: Bear it in mind sir that you were among those who caused hardship for this country and also remember that your name will also be mentioned among those who worked against the betterment of this country….. You and the rest of your Nollywood circle should know that….. PEACE