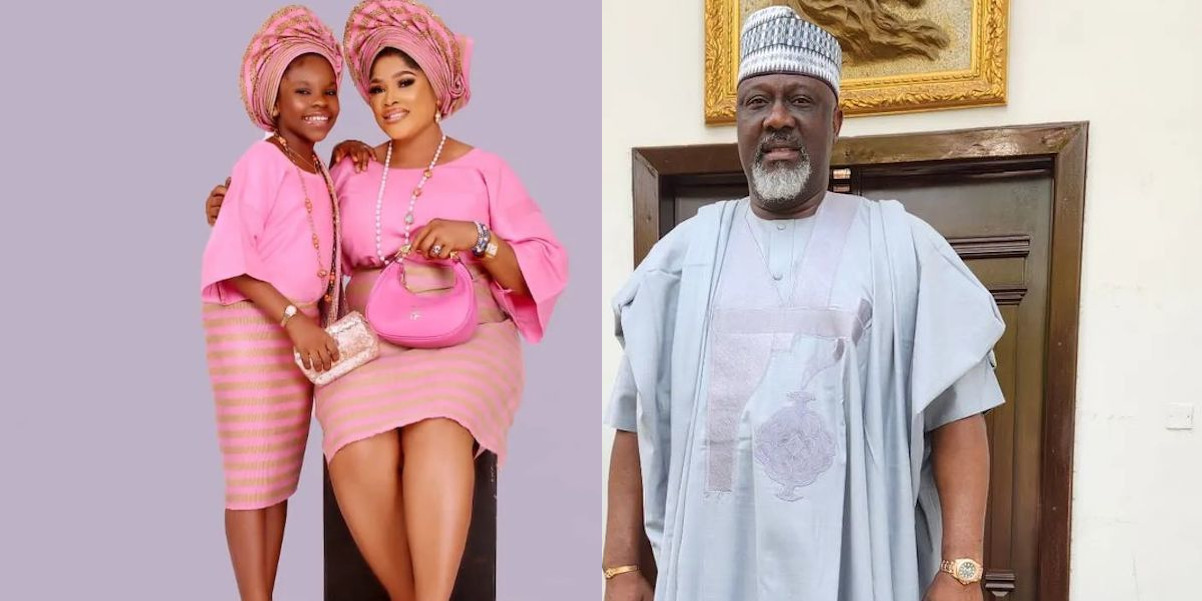 Nigerian actress Bisi Ibidapo, the baby mama of Senator Dino Melaye, is celebrating her daughter as she clocks 10 years today.

Bisi Ibidapo took to social media to celebrate her daughter and express gratitude to her creator God.

I was honored to be able to bring you to the world. You’ve fulfilled me and made my life happier. Happy 10th birthday, sweetheart.May the path of your life be surrounded by love, success and wisdom.

Happy 10th birthday to the best child in the world. You’re the biggest reason for my happiness and I want to see you grow up healthy and strong. Never lose hope and always be thankful to God for the gift of life. I love you my

10 years of Gods faithfulness💃💃💃💃💃
Here is my living testimony and I am more than grateful to God Almighty 💃💃💃
My beautiful daughter🥰🥰🥰 Thank you for been the best girl any mother would have wanted, thank you for been super smart and amazing, if I am to count my blessings… you come in more than billions 💃💃💃
I just want you to know that I am super proud of you and I will be there with you every single moment ❤️❤️❤️❤️

As you hit the double digit … Big 10 💃💃💃 , Just know that God has just started working His wonders in your life and you will beautifully fulfill destiny 🙏🙏🙏🙏

I have loved you before I met you, I love you today, tomorrow and forever ❤️❤️❤️❤️

Recalls that in 2012, Bisi had her baby, Destiny Oluwajomiloju Dino-Melaye and Dino Melaye refused paternity of the unborn baby.

In an interview, Bisi opened up that former Federal lawmaker; Hon. Dino Melaye is the father of the child.

She claimed that her relationship with Dino Melaye was very brief and not planned to bring forth a baby but fate and circumstance proved her wrong.

“Somehow, one thing led to the other and we started dating. He appeared nice, loving and showed me a lot of affection. He was quite frequent in my Lagos house.

“I remember when he came to Lagos for the birthday of Asiwaju Bola Tinubu, I went to pick him from the airport to my house. We were an item and it was known to a couple of our close friends in the industry. Shortly after, I travelled to Canada and it was while in Canada with my colleagues, Foluke Daramola and Moji Olaiya, that I felt the symptoms of pregnancy.

“It started with the usual morning sickness. I could not believe it. It was painful because I could not participate in all the programmes lined up for us in Canada. I can remember that it was Moji Olaiya that went to buy the pregnancy kit that later confirmed I was pregnant.

“Immediately, I called Dino in Nigeria and shared the news with him. He was excited about it and he told me he was looking forward to seeing me in Lagos soon. When I returned, he received me with joy and on an occasion he took me to his hometown, Kabba in Kogi State. He told me he wanted to marry me. He was so nice to me,” she stressed.

“Later, I called him and told him since that’s his new position, I will advise him to go to his parents with another and marry. I’m not keen about society wedding but love to keep the pregnancy and have my baby. He did not allow me to say my mind when he dropped the phone. I called him severally but he refused to pick my calls. I sent emissaries, friends to him but he refused to listen.

“His complaint, according to my friends who took the courage to talk him was that I was rude. You can imagine, Dino refused to understand; he failed to know that I’m no longer a baby. This is my joy, joy unspeakable to me, something I have been praying for and he wanted me to be funny with it. It’s ridiculous,” she added.

Since June 2012, Bisi said, Dino never showed up. “He stopped picking my calls. But each time I tried to call him with another mobile number, he would pick the call but as soon as he finds out I’m the one on the phone he will drop it. I have not wronged Dino, I have only chosen to do what is right to me but he sees it differently. I’m no longer a kid.

“It’s painful that such action is coming from a man who claims he loves the masses, the oppressed people of this country and he is oppressing me. My fate is in the hands of God and He will see me through. I have not been working to earn any money but I have found favour before God and a couple of my friends. I know I’m not alone in this. God is with me.”

TagsBisi Ibidapo Bisi Ibidapo daughter Dino Malaye
“Flaunting your love online isn’t desirable” – Actor, Osagie Elegbe advises Frederick Leonard and Peggy
“Where is your wedding ring?” – Reactions trail May Edochie spotted in UK without her wedding ring
We use cookies on our website to give you the most relevant experience by remembering your preferences and repeat visits. By clicking “Accept”, you consent to the use of ALL the cookies.
Cookie settingsACCEPT
Privacy & Cookies Policy