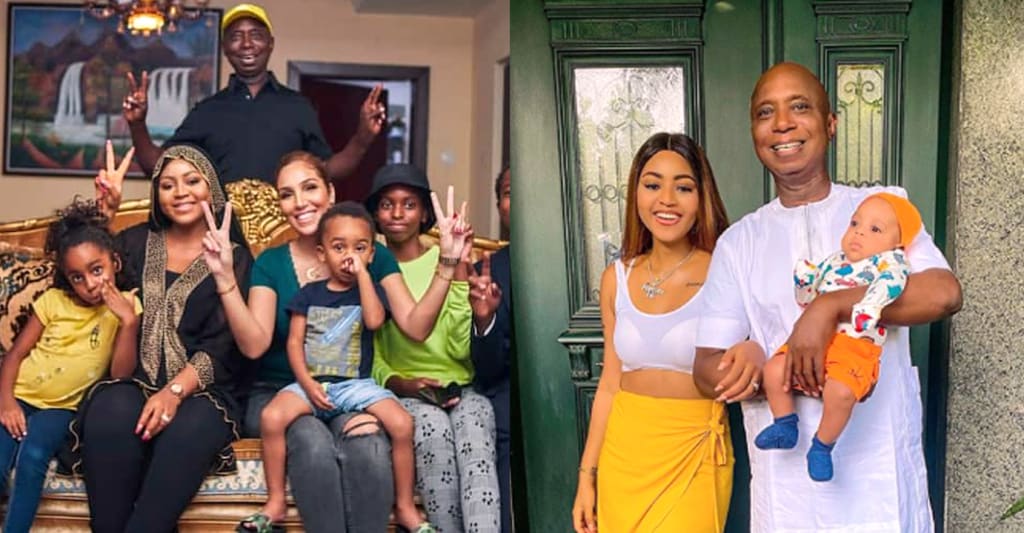 Reginal Daniel’s husband, Ned Nwoko has speaks about why he married multiple wives and why he encourages men to do so.

In a recent interview, he said: Let me tell you the similarity between me and the Ooni of Ife, apart from both of us having more than one wife, my grandfather and his grandfather were both in the House of Chiefs in the Old Western Region in the 1950s. They were part of the select few that went to London for the constitutional conferences. My grandfather and the Ooni’s grandfather and the then Olowo of Owo took many photographs together. So, the Ooni and I have that kind of common background, because our grandfathers were kings and served Nigeria in that capacity. And we are now also serving Nigeria by having many wives (laughter).

Many women are out there on their own without husbands, especially in the southern part of the country, and there is a high level of prostitution. What some of our girls do to make ends meet is regrettable and if our men emulate their northern counterparts by having more than one wife, that could probably change the situation. The average southern may have only one wife, but many girlfriends also, and he is spending his money on the girlfriends; sometimes even more than on his wife. The man who has three wives, for instance, concentrates on them and his children; every money he makes is spent on the family and he is more likely not to have any girlfriends or concubines. The money those with several girlfriends spend on them is a gift, not an investment in the family.

Speaking about how all his wives live together, Ned Nwoko said:

When I was taking you round the palace, I said if it were in those days, I would have showed you some rooms where my wives would have been living. But my wives are big women too, in their own rights. So, they have their different homes. Two are in New York, in the United States (US), two are here in Nigeria and two are in Dubai. But sometimes, they meet here; here is the meeting point. Apart from all of us meeting here sometimes, I don’t travel with my wives together; I travel with one wife at a time. It’s only like once it happened that I travelled with Regina and Laila. But normally, I travel with the kids, the younger kids.

Speaking about if he has a favorite wife, Ned Nwoko said:

The favourite is always going to be the last or latest wife (which is Regina). That’s a natural thing. You know it’s like if you have a new shirt, that is going to be your favourite one.

I have 19 children now. My first child is 30 years old. Those with my first wife are all graduates now. In fact, my last child with her made a First Class last year in England. So, they are on their own; they are independent and go on holidays with their friends.

TagsNed Nwoko
Why I bought my dad a car – Skit maker, Kiriku reveals
Mother rejoice as her daughter gifts her a house as Christmas gift
We use cookies on our website to give you the most relevant experience by remembering your preferences and repeat visits. By clicking “Accept”, you consent to the use of ALL the cookies.
Cookie settingsACCEPT
Privacy & Cookies Policy