Home » Why I bought my dad a car – Skit maker, Kiriku reveals 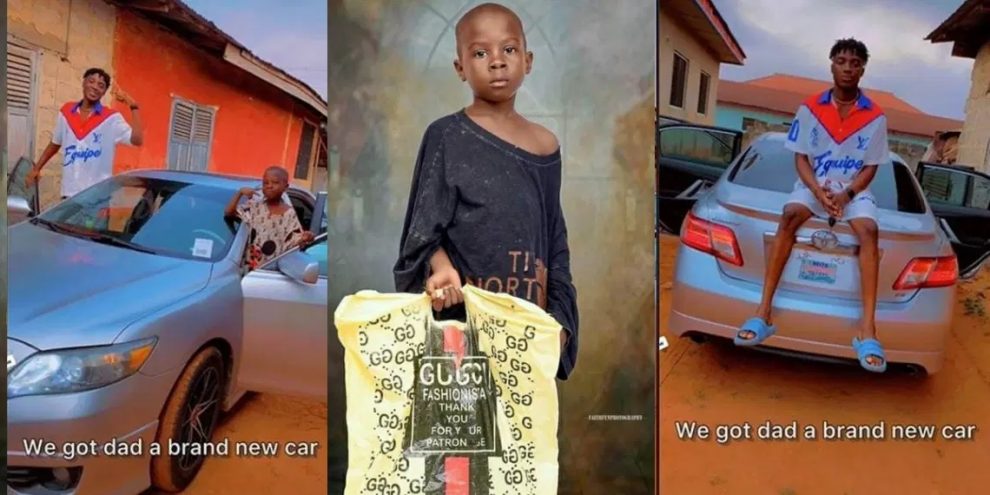 Kid comic actor, Victory Enorense, aka Kiriku, disclosed why he purchase a new car worth million of naira for his father.

Timeofgist recalls that the skit maker surprised his dad with the new whip in August 2022.

The 8-year-old while speaking with Punch avowed that he bought his father a car because the vehicle he was using was no longer in a good condition.

Kiriku, who is known for his popular slang, ‘Abeg shift’, said:

“His car was no longer good, and we decided to buy a new one for him. We did that because the old car was giving him issues. Me and my uncle decided that immediately we started making money, we would get him (my dad) a car.”

Recounting how he developed an interest in comedy, the talented kid said:

“I used to watch the videos of child skit makers such as Emmanuella. I became more interested when I started following people to locations to shoot skits. That was how I started.”

The child comedian also stated that when he started making skits at the age of four, he usually found it difficult to memorise his lines. He said:

“I couldn’t master my lines at once when I started out at the age of four. However, my uncle later taught me how to take my lines one after the other. I am better at it now though.”

Kiriku, who often blends mischief with humour in his skits, noted that having followers on all social media platforms, as well as being nominated for awards, were what he considered to be his biggest achievements so far.

Reactions as Nkechi Blessing twerks for the Ooni of Ife in public
Marrying multiple wives is saving women from prostitution – Ned Nwoko
We use cookies on our website to give you the most relevant experience by remembering your preferences and repeat visits. By clicking “Accept”, you consent to the use of ALL the cookies.
Cookie settingsACCEPT
Privacy & Cookies Policy