A 9-year-old girl from Zimbabwe’s Tsholotsho was impregnated by a 13-year-old boy who happened to be his cousin.

According to the police, paternity DNA test results have established that the victim’s 13-year-old cousin is the one who impregnated the 9-year-old girl.

According to Iharare news, was confirmed by national police spokesperson Assistant Commissioner Paul Nyathi, he said,

“The Zimbabwe Republic Police confirms that the Deoxyribonucleic Acid (DNA) results obtained from the National University of Science and Technology on 25th November 2022, in connection with the paternity of the 9 year old girl’s child, have established that the victim’s cousin brother (13) is the father of the child.

“The 9 year old complainant and the suspect will now receive the appropriate counselling from the Police’s Victim Friendly Unit (VFU).

“The police is now working with other relevant arms of the government to ensure that the due processes of the law are followed. “ 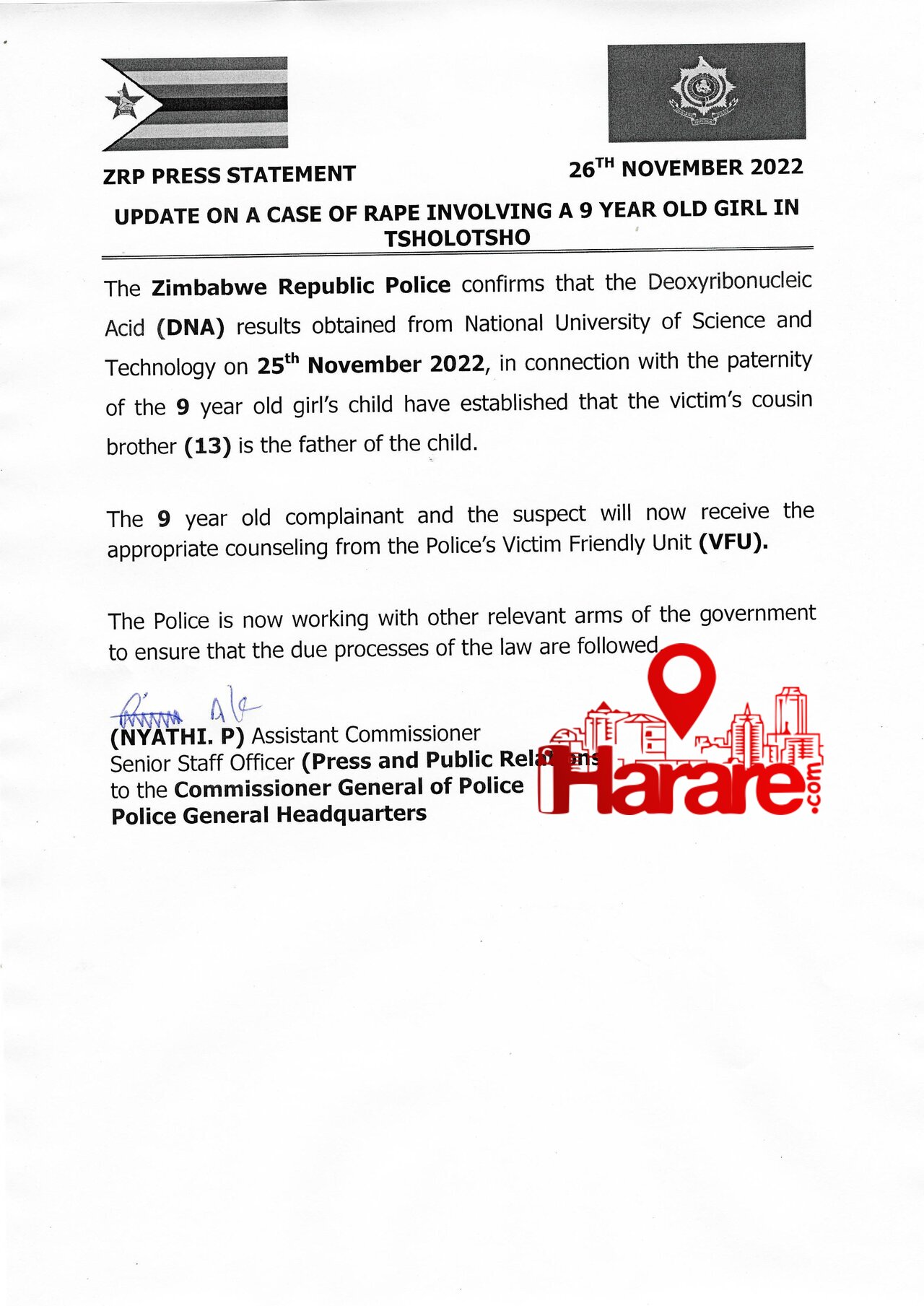 The 29-year-old father of the pregnant girl was earlier arrested shortly after it was discovered that his daughter was pregnant.

Many suspected that the father had rap3d his 9-year-old daughter, who was diagnosed with a rare condition called precocious puberty. Precocious puberty is when a child’s body begins changing into that of an adult (puberty) too soon.

The suspicions of many were raised after the mother of the 9-year-old alleged the father of the child had warned the child that goblins would visit her and insert things into her privates at night.

The 26-year-old mother, whose identity cannot be disclosed to protect the minor, alleged that the goblins that the father warned his daughter about only visited her on the nights when her mother was away from home.

The Applied Genetic Testing Centre (AGTC) of the National University of Science and Technology (Nust) then volunteered to help the authorities establish who had abused and impregnated the 9-year-old.

There was some confusion on after the AGTC initially dismissed the “results,” which appeared to clear the father.

The DNA Lab insisted that the paternity DNA tests were yet to be completed.

However, the police cleared the father of being responsible for the 9-year-old girl’s pregnancy when they announced that the 13-year-old cousin was responsible.

The test results, according to medical professionals, only demonstrate that the father is not responsible for the 9-year-old’s pregnancy—not that he did not rape his daughter.

Man abandons girlfriend in labour room after finding out he’s not baby’s biological father
Bride-to-be fails loyalty test as ‘hookup’ client turns out to be her fiance
We use cookies on our website to give you the most relevant experience by remembering your preferences and repeat visits. By clicking “Accept”, you consent to the use of ALL the cookies.
Cookie settingsACCEPT
Privacy & Cookies Policy