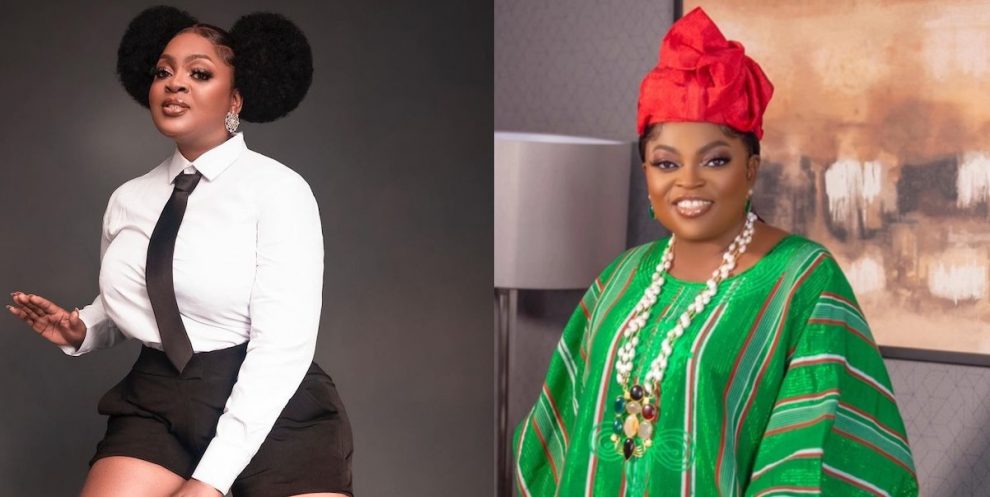 With over 200 celebrities and socialites in attendance at Funke Akindele’s grand movie premiere over the weekend, her off-and-on bestie and colleague, Eniola Badmus was absent.

From her father’s burial to her 20 years on stage event and more, Funke Akindele is known not to always show up for Eniola Badmus’ events which sometimes gets many fans wondering what kind of friendship they had.

Although Eniola Badmus helped in putting up a promotional post for the movie, she ensured she was absent from the movie premiere to pay back Funke Akindele for the times she shunned her own events too.

Recalls that Nollywood actress Iyabo Ojo had to even throw a subtle shade at her colleague Funke Akindele over her absence at the 20 years on-stage celebration of her best friend, Eniola Badmus on 9th December 2021.

Back then, Iyabo Ojo added that Funke Akindele should stop forming class or disassociating herself from certain people and avoid bringing people together only when needed.

Although Iyabo Ojo didn’t mention Funke Akindele’s name in the post, many netizens claimed the post was directed to Funke following her absence at Eniola’s party.

“If you want to form class or dissociate yourself from certain people make such you also learn not to invite them to yours ……… don’t try to bring people together only when you need them, then shun them or dump them when they need you too, That’s not class that’s BULLSHIT. I’m the Queen of my kingdom & i rule it like the LIONESS THAT I AM. STAY TRUE TO YOU” Iyabo Ojo stressed.

Choosing not to show up for Funke Akindele this time, Eniola Badmus around the same time the movie premiere was going on in Lagos went on her page to post a video of herself in celestial sultana dancing for joy.

TagsEniola Badmus Funke Akindele
After 25 years, wife discovers husband has a secret wife & kid
My husband and I are not divorced- Pastor Ayo Oritsejafor’s wife debunk rumors om marriage crisis
We use cookies on our website to give you the most relevant experience by remembering your preferences and repeat visits. By clicking “Accept”, you consent to the use of ALL the cookies.
Cookie settingsACCEPT
Privacy & Cookies Policy