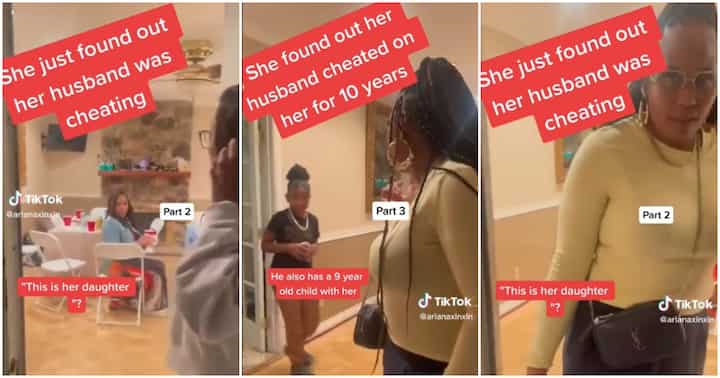 A married woman found out after 25 years of her marriage that her husband has a secret wife and a daughter outside.

In a series of videos shared on TikTok, the first wife told the lady that she was looking for her husband named Donovan. The hidden second wife quickly corrected the lady that Donovan is actually her husband’s name and that they have been living together for 10 years.

She showed the first wife their daughter who is nine years old. The first wife revealed that she has been married to the same Donovan for the past 25 years and showed her little kid too.

Both women tried to comprehend what was playing out as the first wife kept calling out to Donovan to show up. Watch the videos below:

@arianaxinxin Her husband has a 9 year old child too with another wife.. #viral #fyp ♬ original sound – arianaxinxin

@arianaxinxin She found out her husband cheated on her for 10 years.. #viral #fyp ♬ original sound – arianaxinxin

“I am still unmarried because of my child” – 35-year-old single mum cries out
Pay back Time! Eniola Badmus shuns Funke Akindele grand movie premiere
We use cookies on our website to give you the most relevant experience by remembering your preferences and repeat visits. By clicking “Accept”, you consent to the use of ALL the cookies.
Cookie settingsACCEPT
Privacy & Cookies Policy