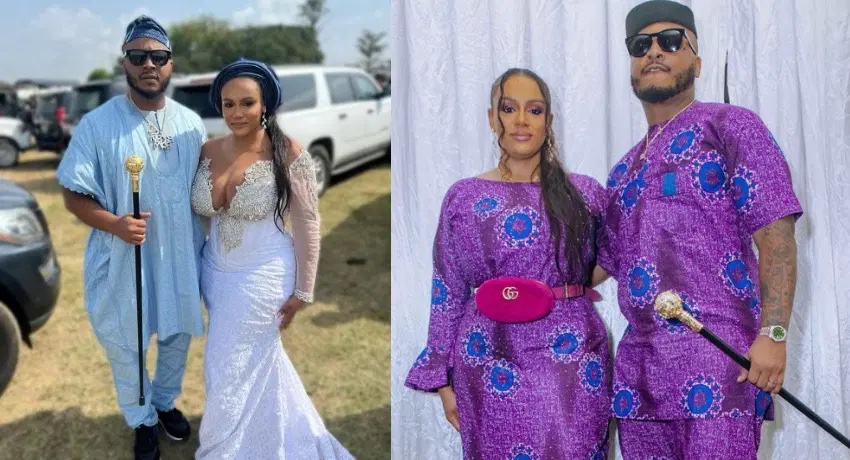 Singer Davido’s cousin, Sina Rambo has finally broken his silence as his wife, Heidi Adeleke accuses him of domestic violence.

Recalls that Sina Rambo’s wife took to social media to announce the end of her marriage with the Osun State Governor’s son.

Heidi made the shocking revelation on her Instagram account on Monday, December 12 where she claimed to be the breadwinner while making series of accusations against the Adeleke family. She wrote:

in a series of post shared on her Instagram account on Monday, December 12 where she claimed to be the breadwinner while making series of accusations against the Adeleke family. She wrote:

“Every evidence shall be presented. Somebody who I just sent 10k naira. Broke asses. I’m NOT an ass kisser and will NEVER BE lmao. Later they will say Adeleke is my only achievement. My mum and family are tired too. Abusive husband I will post more receipts soon.”

In a video she posted, an angry Heidi also accused Sina’s sister of attacking her. She said:

“His sister had the guts to put her hands on me. His sister, that dirty girl that smells. You’re beautiful but you’re smelling. When I told he that I only have love for her, she did this shit to me.”

“Lmao!!! Sina pay me My husband money you owe me from America and Nigeria!!! Beg beg. How many people do you have to fight with over bills? Or until then jack you for neck again like it just happened. Damn Omo gov.

“After having a caesarian section and him rushing me out the hospital because he couldn’t get no weed. Me, had covid in labor, after my CS. I left the hospital this nigga ain’t help with no chores! 3days after cesarean you tell me to cook rice for you, can’t even make tea yourself! SMH! During pregnancy I was turned into a nanny! 9 months pregnant bending and cleaning house up and down because he can’t even pickup after himself. But truly, venting this now, I be mumu”.

Reacting to this through his lawyers, the Governor’s son issued a statement debunking the reports, which he claimed are false. He described the allegations as baseless and lies that have no iota of truth in them.

His lawyer described Sina Rambo as an upstanding and respectable member of the society who holds family values dear to his heart.

Read the statement below: TagsSina Rambo Sina Rambo wife
“My husband and I got engaged 4 days after we met” – Chita Agwu
Congratulations pour as Omo Banke open huge filling station
We use cookies on our website to give you the most relevant experience by remembering your preferences and repeat visits. By clicking “Accept”, you consent to the use of ALL the cookies.
Cookie settingsACCEPT
Privacy & Cookies Policy