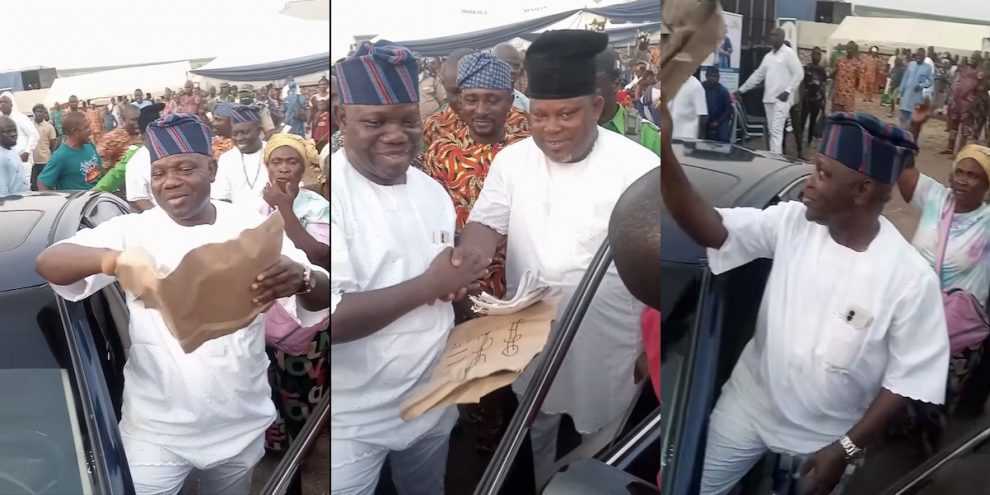 Veteran Fuji singer Sefiu Alao is so excited after a top fan who is an Ifa Priest gifted him a car.

What happened between them, precisely? You must be wondering.

It was learnt that, when Ifatunde had his annual Ifa Festival in the year 2021, it was the same Sefiu Alao who was on the band stand as usual. And during the course of the event, Ifatunde promised to appreciate Sefiu Alao who had been performing at his Ifa Festival for upwards of 15 years, with a car in 2022. And right there, Sefiu Alao too pledged to buy 3 cows for Ifatunde to use for his festival in 2022, as well.

Fast forward to 2022 Ifa Festival by Ifatunde, Sefiu Alao sent in bulky cows to him few days to the event in fulfilment of his promise. And Ifatunde too did not disappoint as he had an exotic car covered with tarpaulin on the party ground waiting for Sefiu Alao. By the time the car was finally unveiled shortly after Sefiu Alao stepped on the stage for his performance, it was discovered to be a Lexus 330, 2010 Model brand of the car, which was well appreciated by Sefiu Alao.

As a matter of fact, Sefiu Alao, could not hide his joy as he praise sang Ifatunde for several minutes, for going all the way to appreciate the gift of cows with such an exotic car. It was indeed, a promise made and a promise kept from both sides.

See a clip from the event below:

TagsSefiu Alao
“Finally off market”- Actress Empress Njamah says as she got engaged
Congratulations pour as veteran filmmaker Tunde Kelani bagged doctorate degree
We use cookies on our website to give you the most relevant experience by remembering your preferences and repeat visits. By clicking “Accept”, you consent to the use of ALL the cookies.
Cookie settingsACCEPT
Privacy & Cookies Policy