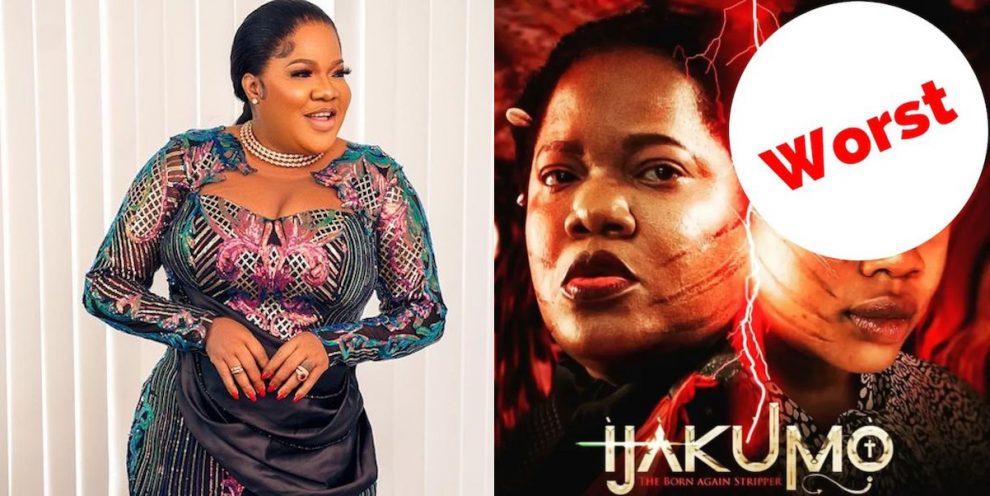 Cinema Pointer, who is perceived as a Toyin Abraham secret hater by her fans released a list of Worst Movies in Cinema 2022 and Ijakumo took the lead.

Despite the negative review, the movie grossed 65 million naira in 5 days.

“Worst Movies in Cinema 2022 🏆 These movies somehow found their way into Nigerian cinemas to deliver the most annoyance, pain & disappointment to viewers, from January to December of 2022 🇳🇬 🥂Congratulations to all winners.” Cinema Pointer wrote as they released the list.

Not Recommended. ‘Ijakumo’ is Yoruba Nollywood’s attempt at making Nigerian versions of Tom Cruise’s ‘Mission Impossible’, George Clooney’s ‘Ocean’s Eleven’ & the video game Mortal Kombat, all in one movie. And it is every bit as ugly as you can dare to imagine, as its brazenly razz touch proves devastatingly ruinous to its lofty ambitions.

After seeing Femi Adebayo’s ‘Ageshinkole’ & Kunle Afolayan’s ‘Anikulapo’, we were confident enough to proclaim Yoruba Nollywood as toppers of the craft, leading Nollywood as a whole to greater heights. Today we feel as though said proclamation might have been premature—We spoke too early. Toyin Abraham-Ajeyemi’s ‘Ijakumo’ drags Yoruba Nollywood a hundred steps back into the abyss of Idumota.

There’s a fable that the story of ‘Ijakumo’ was “revealed” to its writer in a dream. In other words, you can be rest assured that if you choose to see it, you will literally be paying premium to experience somebody’s nightmare. Especially with its generally pretentious acting, terribly nauseating CGI & aggravatingly convoluted story-telling. Plastering it all together is a no-holds-barred dumb slurp excuse for dialogue. Even foolish people will regret paying to see this.

“This brought tears of joy to my eyes”- Jaiye Kuti reacts as Mr Macaroni & Falz pays surprise visit to physically challenged man
Congratulations pour as actor Sanusi Izihaq acquire a Toyota camry
We use cookies on our website to give you the most relevant experience by remembering your preferences and repeat visits. By clicking “Accept”, you consent to the use of ALL the cookies.
Cookie settingsACCEPT
Privacy & Cookies Policy